“All I was taught was the Awaji-knot.”
Hirai Mizuhiki Kogei 3rd generation, Mr, Kikuo Hirai (founded in late Meiji period / Yamashina-ku, Kyoto city)
“Mizuhiki”, a uniquely Japanese culture, is an indispensable of part of weddings, funerals, and ceremonial occasions. Have you ever considered that these mizuhiki are made by hand?
Mr. Kikuo Hirai, the 3rd generation of Hirai Mizuhiki Kogei, magically created the shape of a pair of glasses in front of us by twirling a wire-shaped piece of mizuhiki with his fingers. Needless to say, it’s not that easy to make. We interviewed Mr. Kikuo Hirai, one of the few mizuhiki craftsmen in Japan.
About Mizuhiki
“Mizu (water)” is vital for both humans and God
In ancient times, objects sent from China to Japan were tied together with hemp cord. At that time, hemp cords were not easy to find in Japan, so they used a twisted paper string, and applied the color extracted from safflower on top. Perhaps the Ogasawara style was the origin of the rule, “the right side should be red, and the left side should be white,” and the red and white mizuhiki was born. Some people say that the origin of the name “Mizuhiki” came from the fact that it refers to the drawing of sacred water in ceremonies. When people visit a Shinto shrine, visitors are required to wash their hands and rinse their mouths, which means that the bad things should be taken out from the body before entering the shrine, in other words, to purify the body with water. Since we can’t live without water, and water is considered as an offering to the god, “Mizuhiki” is a craftwork made with such an auspicious material.

All my father taught me was the Awaji-Knot
I am the 3rd generation in Hirai Mizuhiki Kogei that was originally started as a Yuino-kazari (betrothal ornaments) maker, back then I worked in the electronics industry until I was 34, so I didn’t practice mizuhiki at all. My father died two years after I started doing mizuhiki at home, so I had to learn it by watching and following his examples. I had learned the Awaji-knot, so I proceeded to decipher it. This is the most important style of knot. The “glasses formed mizuhiki” we delivered the other day is also made with an Awaji-knot in the center. There was also a shape we called the “glasses knot,” which we applied to create this knot. The Awaji-knot is a lucky knot that can‘t be untied no matter where it’s pulled, and the word of Awaji comes from awabi (abalone). The number of strings of mizuhiki is basically an odd number, because an undivided number is good luck in Japan. 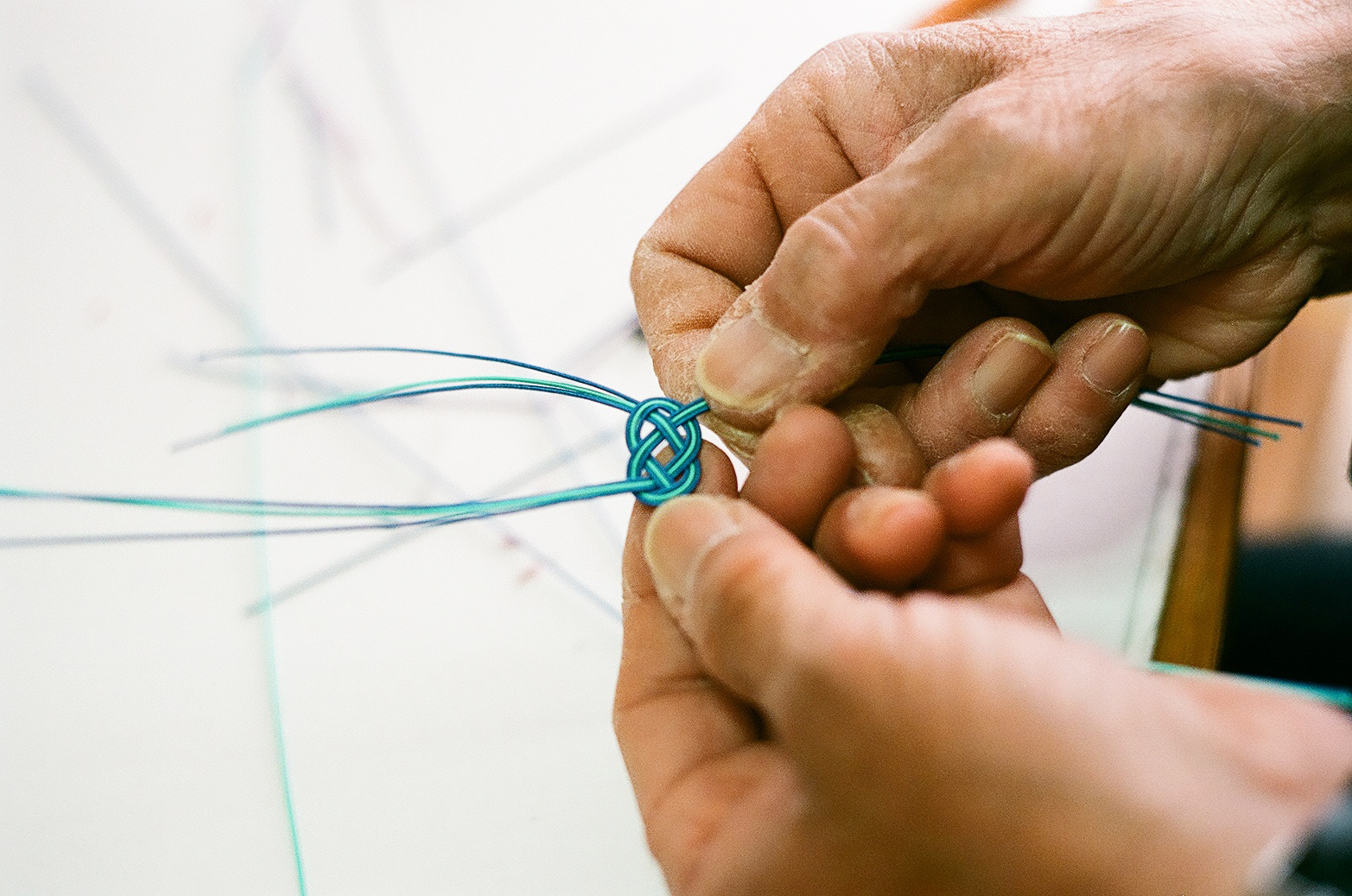 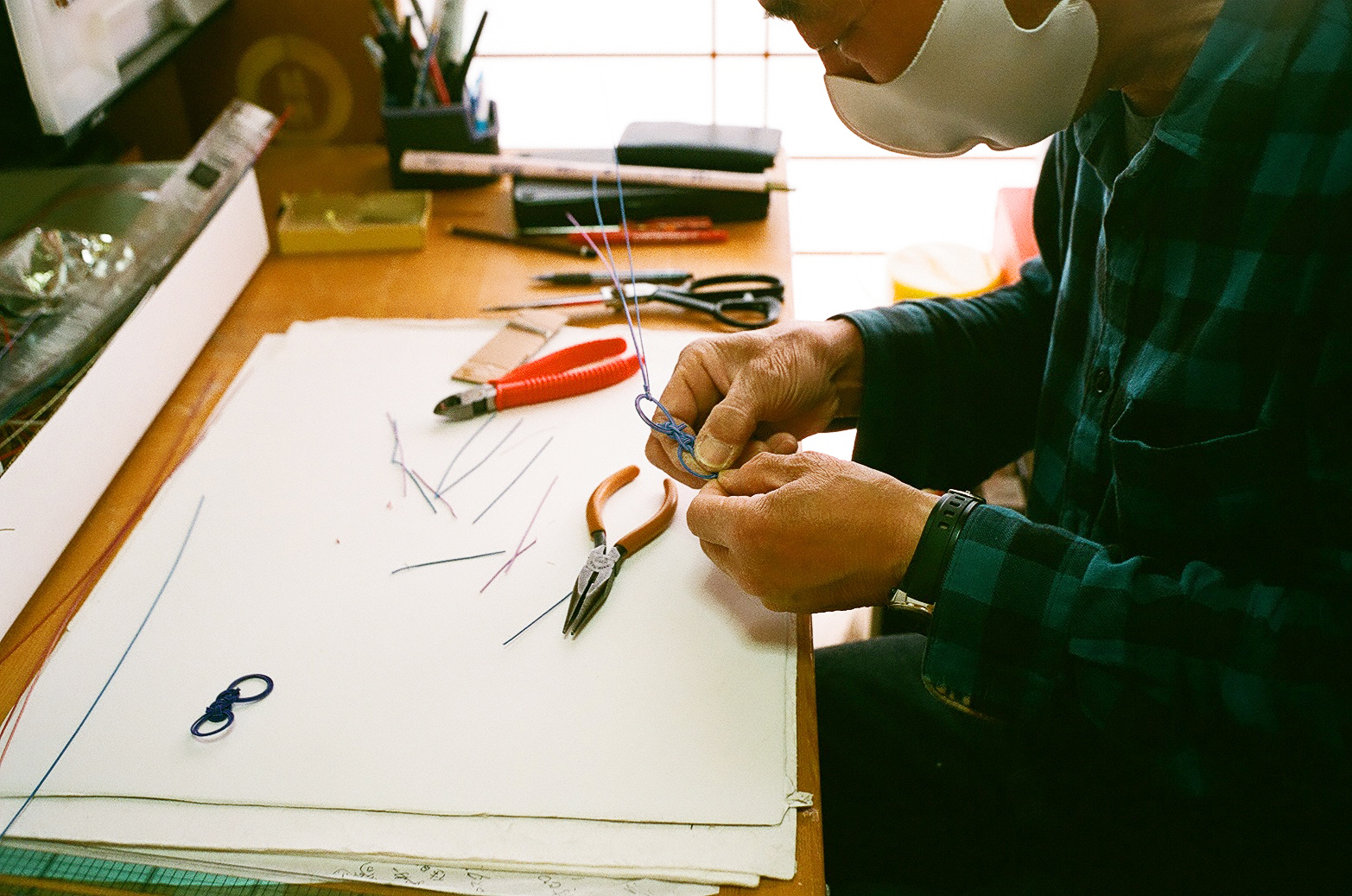 About Inheritance
I hope someone will do it
The demands of the market are also changing. What I create is not the classic image such as pine, bamboo, plum, crane, and tortoise, but the most popular type of products I make now are hair ornaments, brooches, and other accessories. Making a Yuino-kazari (betrothal ornaments) is very rare, and in fact, since there are no longer any yuino (exchange of engagement gifts) so the term itself is no longer used today. Mizuhiki is still produced in Kyoto, but 90% is produced in China and 10% in Japan, and still exists in paper production areas such as Kyoto, Ehime, and Ishikawa. The number of types of mizuhiki is decreasing rapidly and has become very few. My current feeling is that I would like someone to engage in the craft of mizuhiki, even if only as a hobby. Currently, there are about 4 people in Tokyo, Shizuoka, and Ishikawa who are making accessories with mizuhiki, and I am connected with all of them.
Things that are not negotiable
Quality is more important than quantity
You can find regular Shugi-bukuro (special envelope for momentary gifts) at convenience stores and other places in Japan, but the knots on the envelope are not firmly tied. Of course, it doesn’t look nice, and it would break if the first step of wringing process has not been properly done. Only the circle part should be tied softly, and the part extending upward should be handled correctly, otherwise the mizuhiki will fall apart and be ruined. How to finish off a single mizuhiki is all based on intuition.
About Tradition
The starting point for creating something new
I think that tradition is the starting point for creating something new. So if you only follow tradition, modern people won’t come along with you at all anymore. So if you create something based on tradition, people will be interested. I keep the historical part of the knot as the origin and create a new type of knots１. 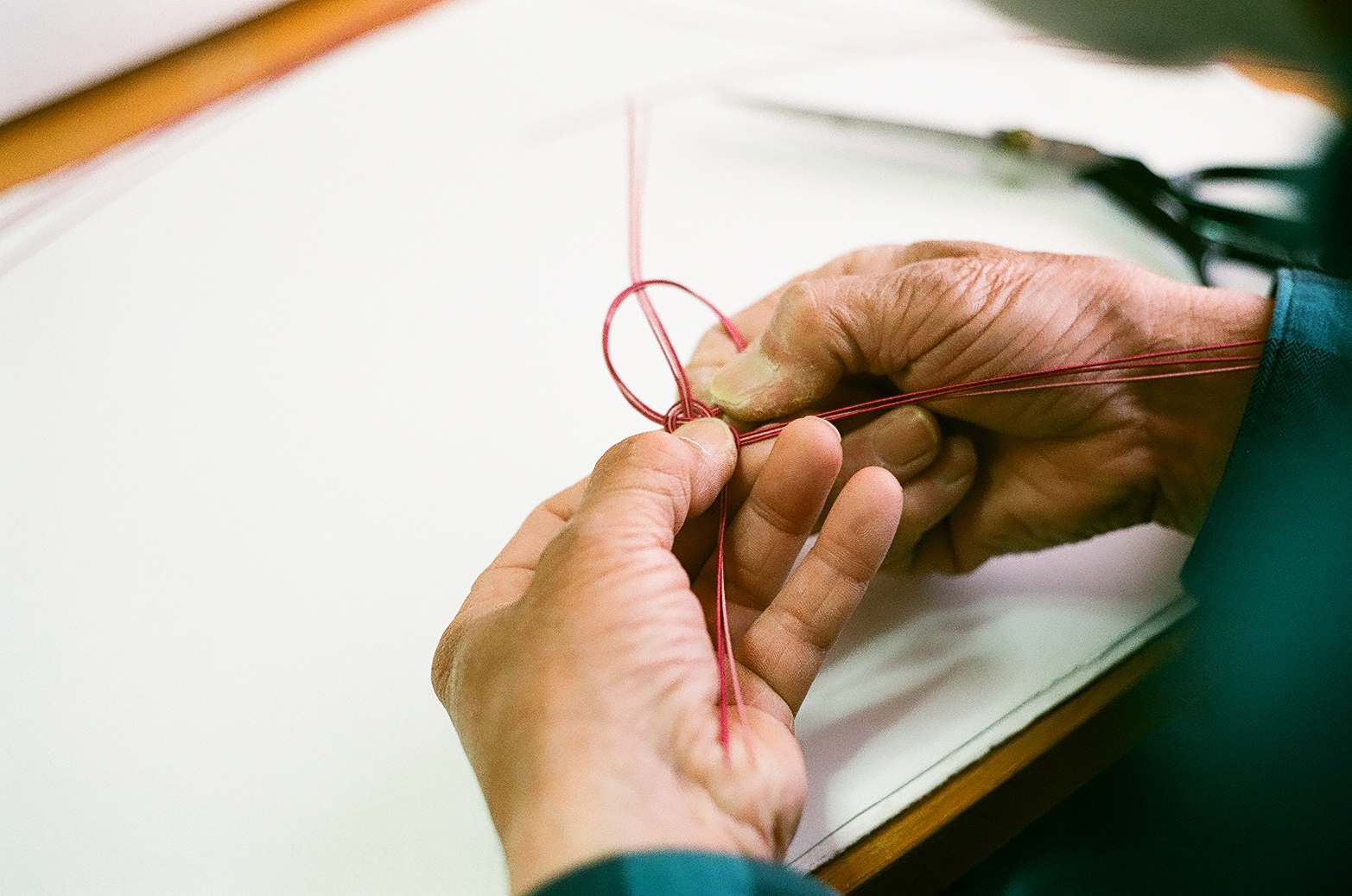 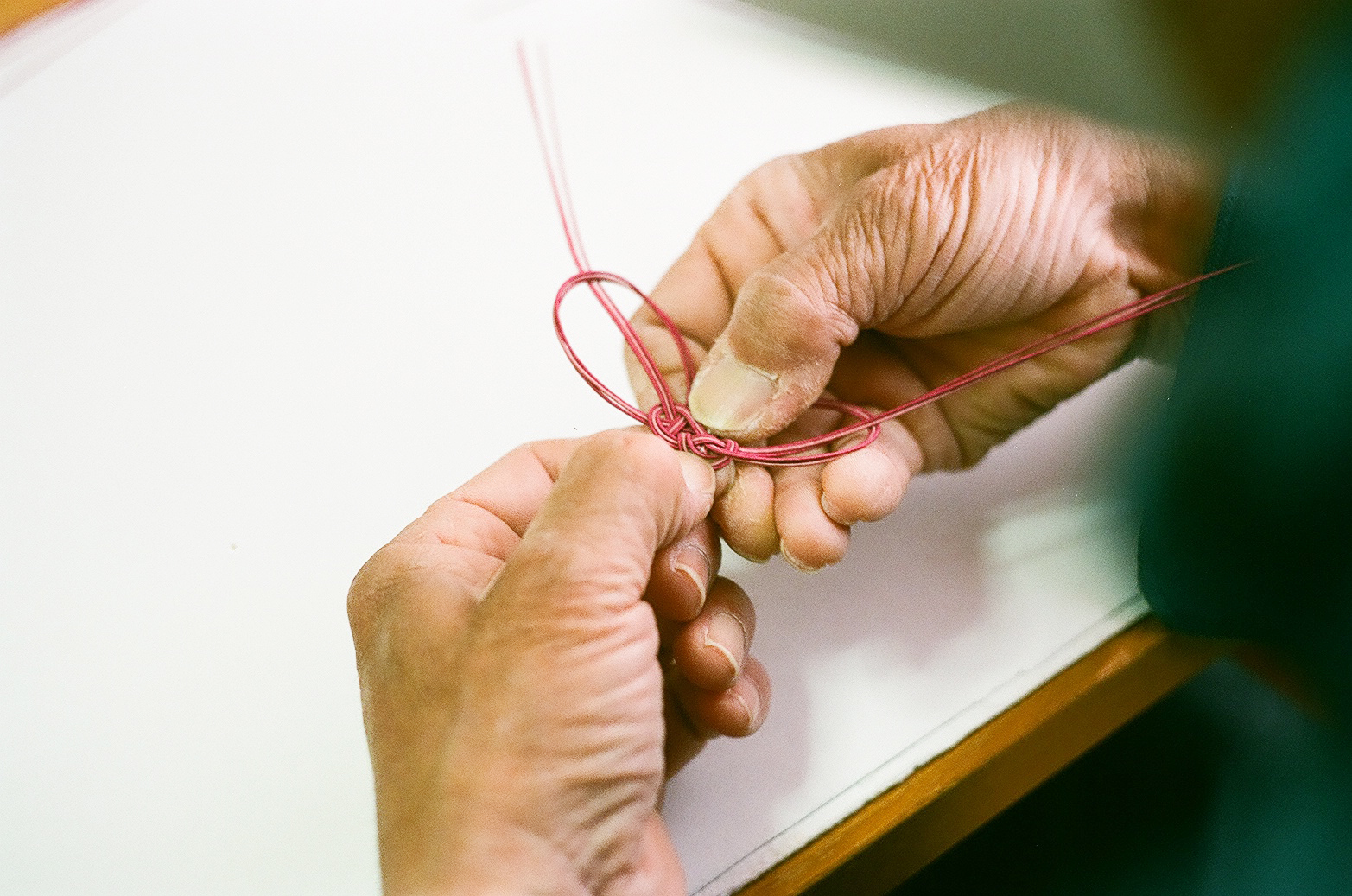 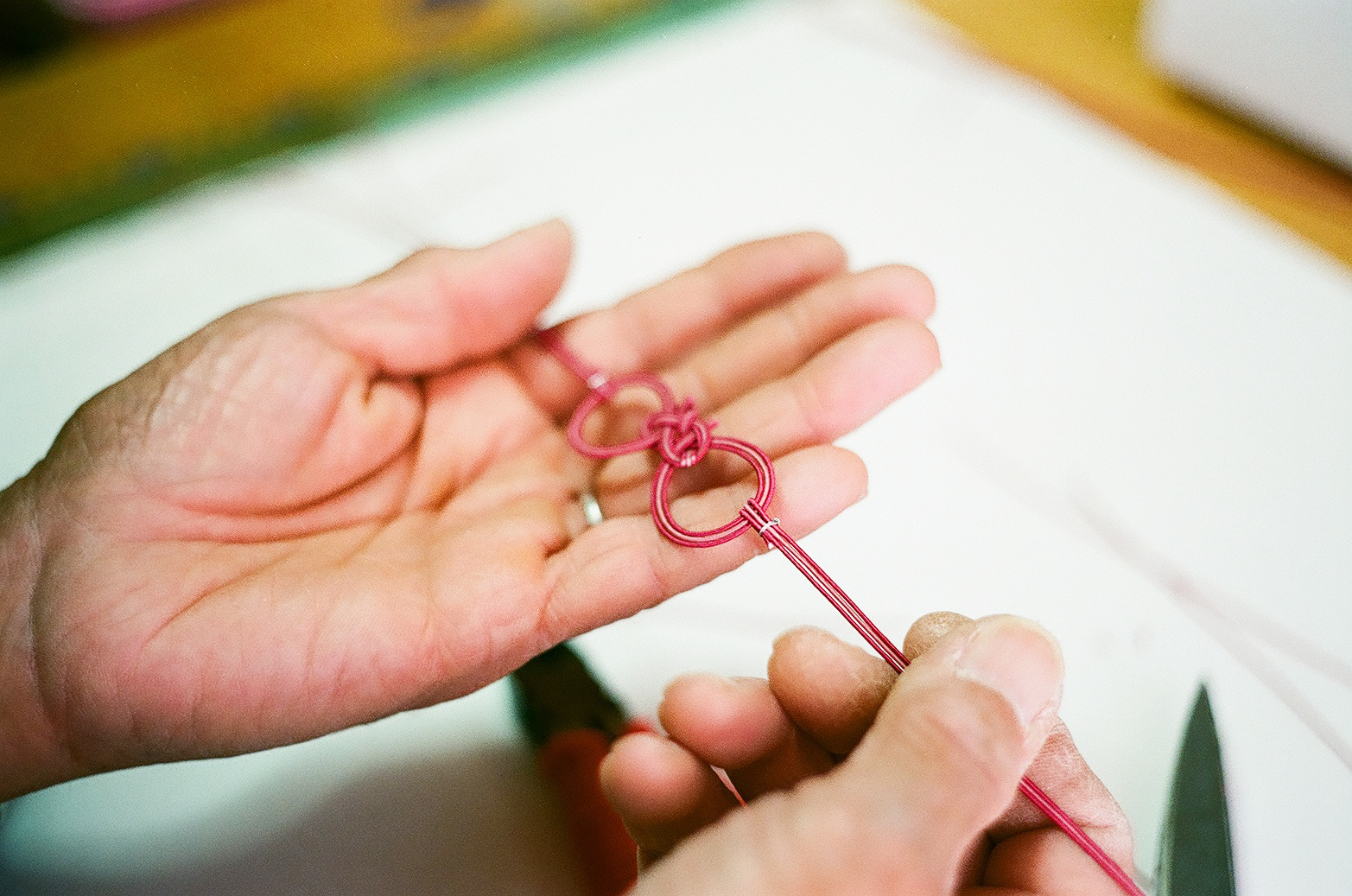